Over the last year a large anti-fracking movement developed across much of the United States. Josh Fox’s documentary “Gasland” managed to convince people that fracking will contaminate the drinking water all across our country.  Most of his documentary is a complete lie, but that is not going to be the focus of this post. What is the focus of this post is to try to educate people about fracking.

Natural gas is the target of most of today’s fracking, and fracking has increases the proven and unproven reserves of natural gas from having a few decades worth, to having hundreds of years worth. It appears that the growth in reserves can be expected to grow significantly over the next decade as the fracking process is improved and more areas are explored.

The amount of energy that can be unlocked using hydraulic fracturing is significantly greater than all of the oil that will ever come out of the ground in the Middle East, and if our country would further develop its infrastructure for natural gas we could effectively stop our dependence on countries that take great pride in causing physical and financial damage to us.  The living conditions for everyone in the world is effectively dependent on how much energy they consume, and alternative fuels are not a viable option as long as they can not be offered at a competitive price.

It is important that the anti-fracking movement not go too far over the coming years. Currently the states are responsible for fracking regulations within their respective states, and I personally hope that it remains that way. However, it appears that many of the states on the East Coast and a few others are having a hard time regulating the drilling and fracking.  Fracking fluids are not being disposed of properly in some cases giving the anti-fracking movement ammunition to push bans on fracking. The goal of Josh Fox is to ban fracking in the entire United States, and without an educated public he may get his way.

Fracking should not be banned on a massive scale the benefits far outweigh any possible accidents, and proper regulation in states like North Dakota prove that Fracking can be done safely.

Explanation: People seem to have a general misunderstanding of the water table. They seem to think that all water underground is connected when in reality there is effectively no communication between layers.  Shales typically act as barriers to vertical flow. Now you may be thinking, “but they are fracturing the shale so contaminated water will be released into the drinking water.”  You are wrong because you are forgetting or may not know that fracturing is taking place thousands of feet below ground, and between the target shale and drinking water there are many layers of other rock.  Think about it like a book only some of the pages are made of sponge and some are made from plastic (really thick pages). If water cracks one page made of plastic (shale) you will contaminate the neighboring sponge (sandstone) page above, but at that point the contaminated water is able to flow laterally and the pressure drops so the next plastic page (rock layer) will not crack.

East Coast Specific: In New York and Pennsylvania there are many significant sandstone (sponge) units that stand between the Marcellus Shale and any potential drinking water sources.

Additional Problem:  People have come to associate flaming sinks with Fracking.  The reality is that flaming sinks have always been common.

If there is gas in drinking water in eastern states it is much more likely to be from a rock unit much closer to the surface and may or may not be related to oil and gas companies. Nearly all of the rock units in New York appear to contain at least some natural gas which implies that it is migrating upward. The migration of the gas has probably taken millions of years, but based on the fact that natural gas is found so close to surface it should not be uncommon to find natural gas in water wells. If gas is suddenly found in drinking water after drilling takes place is may just mean that the oil company release gas near the surface.  Fracking fluids will not be  found in water samples, but the water that becomes mobile from gas movement is still nasty stuff that shouldn’t be drank. 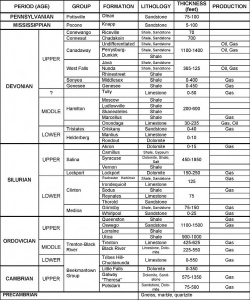 In North Dakota shallow natural gas has been found in 52 of 53 N.D. counties, and even though hundreds of oil wells are fracked every year it is highly unlikely that any of the discovered gas can be related to oil companies in anyway. The gas was discovered using old water wells in ares that are both near and far from active oil fields. https://www.dmr.nd.gov/ndgs/shallowgas/sgasnew.asp

Explanation: It sounds bad, but large cities use a lot of water so even if fracking fluid did get into a large cities drinking water it would get diluted to a safe level. Fracking fluid needs to be taken seriously,  but in the unlikely event that there is a significant leak most large water sources could handle the contaminates.

The solution to pollution is dilution. (stupid statement) I know it sounds like I am downplaying the problem, but it really is that simple.  You are probably exposed to more nasty stuff every day. People should probably be more concerned with the water that runs out of the street gutters and off walmart parking lots than fracking chemicals. (Walmart did clean up a lot after the documentary “high cost of low prices” came out, and I expect the oil industry is going to be a lot more careful in the future too.)

Fracking could/can cause localized problems such as a single home’s water can be rendered useless, but on a large scale there should be no major problems as long as regulations are in place.

New York  City Specific Answer:  More than half of your water is provided through a leaky aqueduct, but the advantage is that there is a positive pressure in the aqueduct so things only leak out and not in. (unfortunate for some of the towns north of the city)

The Future of Fracking:

All of the recent negative publicity is making oil companies rethink the use of some of the chemicals that they have used in the past. Halliburton (everyone’s favorite) has already developed a fracking fluid called CleanStim which uses ingredients soured from the food industry. I expect that increased pressure from anti-fracking groups will eventually move the industry in that direction, but I reiterate fracking bans are a poor solution to a solve problem that is not really a problem.

If fracking were banned it would probably stop peoples water wells from being contaminated because there would be no drilling at all, but in many or most cases it is probably just a problem with drilling and not fracking.

Soon to come…. The Importance of Natural Gas in America’s Future.

I may add a little to this post. I skipped a lot of important information.  If you can think of anything I should add let me know.  If anything is unclear let me know and I will try to fix it.  If you disagree tell me why.