I once attended a talk where the speaker posed a rhetorical question “What is it about water that makes people so stupid?”.  The question certainly seems to hold true.  In Texas we see continued use of water for irrigation when cities do not have enough for the people who live there; in Nevada we see the continued expansion of Las Vegas which is totally dependent on a very limited supply; in California we see sprawling cities steal entire rivers for their continued growth, and along nearly all major rivers we see continued development of areas that are known flood plains.

Whether an area be too wet or to dry people seem to make poor decisions regarding water, and they never seem to understand the scope of the problem.  Last weekend the people of Minnewaukan, ND managed to prove that small towns are not exempt from the poor decision making process. In the middle of Main Street sat this sign.

Typically, I’m quick to lend a helping hand to those who need it, but in this case the area protected is totally useless, and the party was likely nothing more than an attempt at a publicity stunt. I know I’m being harsh, and I do not mean to belittle the hard work that went into the project.  Sandbagging helps a community bond and grow stronger. However, I choose not to help because I did not believe in the cause.  Hopefully better decisions will be made in the future.

What made this project a bad plan:

The 900 bag requirement stated on the sign was off by more than four fold. All told more than 4000 bags where filled, although, not all of them were used.  Prices for sandbags range between 17 and 25 cents a bag which means that this dike could costs upwards of $1,000 just for the bags. It appeared that approximately 30 people helped out, and several vehicles and trailers were utilized which likely brings the actual cost up a few hundred dollars.  In a normal situation this is just drops in a bucket, but for a city that is already broke it is not a good way to be spending money. 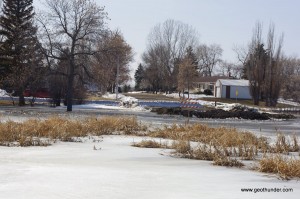 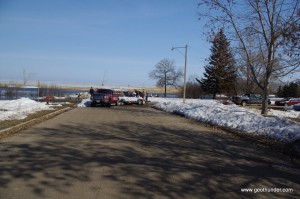 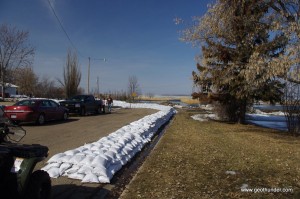 Residents of Minnewaukan: I wish you the best of luck in the coming months, but please make it a point to use tax dollars and time wisely. Don’t simply agree to something because other people are.  The people currently in charge of the city seem to lack common sense so make it a point to question what they do.

Special Note: It has come to my attention that the city would like to move the water tower which would cost about a half million dollars.  City officials: Please think things through there has got to be a more affective alternative than moving the water tower. The structure is likely safe for this year anyway, and there are more pressing issues at hand.  Just because the government may give you the money to do it doesn’t mean that it is the right thing to do.